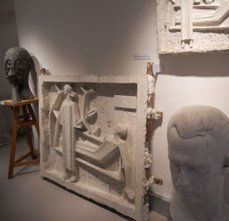 A Centre for Exhibitions and Activities

The Musée du Plâtre is housed in the municipal Musées Réunis building. The history and resources of Cormeilles form the backbone of the museum's activities, with special focus on subsurface resources—gypsum—and building materials, industrial applications, and the arts.

(Illustrated: part of the collection of original plaster works by the surrealist sculptor Georges Boulogne.)

See news on the Musée du Plâtre on Facebook museeduplatre

Project on school trips and other visits to the Cormeilles quarry, where students could study the 100-metre high section of the Paris basin.

To celebrate the 230th anniversary of the birth of Louis Daguerre (painter, inventor of the daguerreotype, and co-inventor of photography) in Cormeilles-en-Parisis, the Musées Réunis commissioned a modern diorama by the noted painter Stéphane Belzère-Kreienbühl, for a spectacle to the theme of Debussy's "Clair de lune", the third movement of the Suite bergamasque. A unique experience for visitors to the Museum.

Plaster and Gypsum News and Information

The gypsum extracted from the quarries downstream from Paris, after transformation into plaster, was shipped to Normandy, Picardy, Belgium, England and even the United States. This trade was organized around river ports throughout northwestern France -- including the La Frette port just two miles from the Cormeilles quarry -- as well as the ports of Rouen and Le Havre.

Historian Jacques Hantraye traces the development of the trade throughout the 19th century. (In French)

Visitors to the Cormeilles quarry. 100 years in the field.

For over a century, school children, advanced students, geologists, scientists, building trade professionals, manufacturers and the general public have visited the quarry at Cormeilles-en-Parisis. The quarry's exceptional 100-meter vertical cross-section of the Paris Basin has played a key role in promoting an understanding of geology, particularly in school textbooks, which feature Cormeilles prominently.

The firm Placoplatre was established in 1946 with the introduction of plasterboard (drywall) to France, but its origins go back even further, with multiple sources that combine to form a unique adventure. Placoplatre is perpetuating the spirit of the pioneers of gypsum plaster, who developed into seasoned, inventive industrial companies during the 20th century. Placoplatre has combined the legacies of multiple companies and generations of men in the organization we recognize today. (in French)

Tell us about when you visited the quarry in Cormeilles

Generations of scientists, geologists, engineers, building professionals, teachers, students, and school children have visited the Cormeilles quarry and its exceptional geological cross-section. The Musée du Plâtre is seeking testimonials and documents, photographs, films, notes, publications, and so on concerning these visits.Download questionnaire

To celebrate the 230th anniversary of the birth of Louis Daguerre (painter, inventor of the daguerreotype, and co-inventor of photography) in Cormeilles-en-Parisis, the Musées Réunis commissioned a modern diorama by the noted painter Stéphane Belzère-Kreienbühl. Today, as in the past, the spectator will be captivated by the Cormeilles Diorama, with the experience of a motionless journey through a 19th century village scene. A forerunner of virtual and augmented reality, the diorama creates an illusion of changing times over the course of a day. Come view this in person or in a video clip.

PLASTER AND GYPSUM NEWS AND INFORMATION

This booklet reviews the history of gypsum plaster in the greater Paris area, how to recognize these facades, typical disorders, and how to restore them. (The cover shows the historical schoolhouse that was the first home of the museum in Cormeilles.)

(Gypsum mines and quarries in the Val d'Oise department)

(Our most recent publications)

(Proceedings of a GRPA conference on Plaster and Colour, second part: Painted plaster) 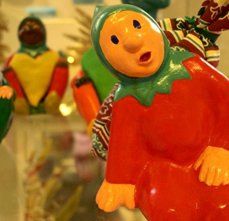 The museum's plaster of Paris workshop provides a learning experience for children from 4 to 12, under expert adult supervision.

Plaster is the ideal material for children to discover working in three dimensions, and the pleasure of modeling or sculpting natural materials. Children learn various techniques, including casting, working with negative molds made of plaster of clay, and hand-painting plaster figurines.

The workshop benefits from support from two partners: the Placoplatre production plant in Cormeilles which supplies Molda® plaster, and Saint-Gobain Formula, which supplies the T-shirts that children use as aprons. The workshop is open during school holidays, and can also be "privatized" for birthday parties or other celebrations.

Operated by Placoplatre® (a Saint-Gobain Group company), the quarry in Cormeilles-en-Parisis produces 350,000 tonnes of gypsum each year.

Extraction is currently shifting from open-cast to underground mining. Ecological restoration work on the site began in the 1980s, with backfilling and revegetation. This will result in a large "green space" of over 100 hectares (roughly 250 acres) in the heart of the Greater Paris region. 45 hectares were opened to the public in 2017.

Open-cast mining has been discontinued; all gypsum mining is currently conducted underground.

The museum has published the Lettre Blanche newsletter since January 1996, when it replaced the earlier Fer de Lance (French for "spearhead crystal") published from 1985 to 1995. The newsletter focuses on all aspects of gypsum and plaster, including art, history, heritage sites, traditions, science, the environment, economics, and skills. Since September 2009, the print run has been increased to 12,000 copies, on the strength of our partnership with the Placoplatre Foundation. Readers include not only gypsum and plaster specialists (professionals, artists, scientists, and historians), but also residents of Cormeilles-en-Parisis and areas near the quarry.

(Aerial view of the quarry, before underground mining.)

Special issue: Visitors to the quarry

Teaching in the field - Cormeilles, reference site - Visiting the Cormeilles quarry - Other visitors - Entertainment: the quarry on the screen